How do Entry-Level contracts work?

Entry-Level contracts seem to be an easy thing: Every first-time NHL-Player under the age of 24 gets one, they are limited in salary as well as length, and that’s pretty much it, right? Wrong. ELCs, as we call them for short, can be extremely complicated. So buckle up, tons of numbers, percentages and way too much lawyer talk coming up.

{sitelinkxoff}Okay, let’s start with the basics. ELCs are a variation of the Standard Player contracts that NHL teams hand out. It is meant specifically as a first-time contract for NHL rookies (like Nico Hischier in the near future), and they have no choice but to sign one. However, there is an age cut off. And it already gets technical here. Any player of the age of 24 or younger as of September 15th in the year that he signs his contract is subject to the terms of an Entry Level contract. For Europeans, the age is lifted up to 27, because screw Europeans.

Now how does the thing look like? Well, first of all, every ELC is a Two-Way contract (Not sure what that is? Read about it here). Additionally, ELCs are limited in length, as well as salary. The salary part is pretty easy, so let’s tackle that one first. All ELCs are limited to a salary of $925,000 in the NHL and $70.000 in the AHL. When it comes to the length of the deal, it gets a little trickier. Depending on the age of the player at the time of signing (yeah, so what happened to September 15th, NHL?), ELCs are restricted to the number of years found in the list below, straight from the NHL CBA (Collective Bargaining Agreement). 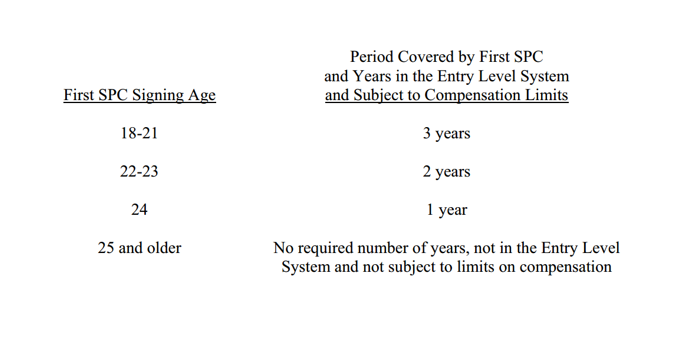 Except, again, Europeans. They have to sign one-year ELCs until the age of 27.

Had enough of the numbers already? Well, let’s take a quick break. Here’s something dumb I stumbled upon when scrolling through the CBA to research this article: The NHL defines “European Player” as any player not playing in North America at the time of his draft year. So when former LA Kings goaltender Yutaka Fukufuji was drafted from “Kokudo Keikaku Ice Hockey” in the ”Asia League Ice Hockey”, he was just considered “European” by the NHL, even though he hadn’t played a single game west of Shanghai at that point.

Alright, back to the numbers and the lawyer stuff. We got applicability, length and basic salary down. Now let’s look into the most complicated topic of them all: Bonuses.
An Entry-Level contract can contain one of two types of bonuses. Signing- and performance bonuses.

Again, signing bonuses are a little bit easier, so let’s have a look at those first. Every NHL Standard Player contract can (and often does) contain a signing bonus. However, for ELCs, they are capped at 10% of the total contract value (meaning $92,500 at max). Signing bonuses are paid out annually, regardless of contract type or league in which the player plays during said year.

Statistical performances such as:

All-Star appearances such as:

League wide statistical performances (or awards) such as:

All of these bonuses are capped at 2 million dollars annually per contract and count against a team’s Salary Cap if and when they are owed to the player.

As always, let’s tackle the big question: why? So, when the league and the Players Association are battling each other for a new Collective Bargaining Agreement, the players representing all NHL players in the negotiations tend to be veterans. They have all played in the league for a while now, and capping rookie salaries does not affect them in any way. In recent negotiations, it has thus been a strategy by the Players Association to allow more and more restrictions on the rights of young players in exchange for maybe a better retirement plan. From the side of the league and the managers, extremely talented young players that are also extremely cheap are a match made in heaven anyways.

Okay then, that’s definitely all you need to know about Entry-Level contracts. Now you’ll understand what it means when Nico Hischier gets one of these after getting drafted. But as always: If I left anything unanswered, or you have a suggestion as to what I should explain next, please contact me via Twitter @EuroCaps or send me an E-Mail to .

The NHL can be very complicated and scary. But fear not because someone is here to explain it! Ever wondered how the NHL Draft or Salary Cap works? You'll find answers here.

We are always looking for passionate hockey fans who want to join our team and help us take our project to the next level!